Public health is termed as art and science used by individuals and healthcare professionals to prevent infections prolonging life span and enhancing the quality of life through standard efforts and choices of the organization, individuals and the society at large. With the following definition it is therefore easy to establish that the main role of public health is to minimize health inequalities by application of key concepts to ensure that all members of the society are treated equally and protected from infections that can be transmitted, promoting the health of the general population and improving the provision of services in healthcare systems. Public health and health promotion are highly associated because the idea behind health promotion is to encourage the public to attain greater control over the decisions that impact their entire health (Gagnaire et al., 2017). In Saudi Arabia, public health aims at maintaining a functional association between organizations and the public through communications to achieve its objectives. Public health influences the main structure of organizational practices.

Surgical site infections are some of the most prevalent in patients undergoing gastrointestinal operations. This is because the pattern of wounds the patient's experience to keep on changing from time to time. A study from Saudi Arabia shows that out of the 5100 patients who underwent elective gastrointestinal between 2007 and 2010, 44 SSIs were identified (Morgenstern et al., 2016). This is a clear indicator the SSIs are one of the most critical issues in the surgical sites. The Saudi Arabian government has initiated tremendous improvements to improve the health care system of the country at a steady pace. This has seen many health sectors embrace technologies that affect their services.

Prevalence and Incidence of Surgical Site Infection in Saudi Arabia

Surgical site infections have a significant influence on the morbidity, mortality and healthcare expenditure of most economies. The worldwide incidence of SSI was 2.55% in 2013 which is below the reported figure of 2.6% to 41.9% in 2015 (Al-Mulhim, Baragbah, Sadat-Ali, Alomran& Azam, 2014). In Saudi Arabia, most of the patients experiencing surgical site infections were found to be aged 55 plus years. This shows that SSIs in Saudi Arabia is more prevalent on the aged people. Also, diabetic people are more likely to experience SSIs because they may undergo surgeries that cause them these sort of complications (Allegranzi et al., 2016). Men are as well most affected by SSI because they are addicted to smoking habits that expose them to the risk of SSIs more than their female counterparts.  In a cross-sectional study contacted across Saudi Arabia, it was found that smoking impairs tissue oxygenation and local hypoxia through vasoconstriction, therefore, influencing the healing of SSI wounds.

Risk factors for surgical site infection in the healthcare setting

There are multiple risk factors which are related to the development of surgical site infection (SSI) in various healthcare settings. Risk factors for surgical site infection can be categorized into modifiable such as weight and non-modifiable such as gender (Namba, Inacio&Paxton, 2013). Some of the risk factors which can expose a patient to surgical site infection include obesity which happens mostly after abdominal procedures. Malnutrition is considered another significant risk factor for SSI. According to recent studies which have been conducted, nutrition has been recognized as a significant factor for nosocomial infections which includes surgical site infection among patients who undergo any surgery. Patients, mostly from poor socio-economic backgrounds who are exposed to poor diets have a weak immune system which is not capable of fighting infections, and thus they are at very high risk of been infected by SSI. Use of tobacco is also related to SSI. This happens because patients who smoke cigarette have inhibited wound healing due to poor circulation of blood to the skin which is caused by micro vascular obstruction and thus it means the skin does not get enough platelets which are responsible for blood clotting (Korol et al., 2013). Poor hygiene in a healthcare setting is another main risk factor for SSI. This is because hygiene is essential for patients after surgery so that they can heal faster without been exposed to any infections.

There are various interventions which can be put in place to be able to control and manage surgical site infection in a healthcare setting. The first intervention includes healthcare professionals screening patients so that they can be able to determine if the patient has staph bacteria in their nose. Clients who are infected by this bacteria are given antibiotics which they are supposed to use up to the next five days after the surgery as instructed by healthcare professionals (Anderson et al., 2014). Another intervention which can be applied is preoperative which involves educating the patient regarding ways which they can use to manage and prevent SSI before they undergo surgery. This education consists in removing all the hair with electric clippers and use of an appropriate antiseptic agent for skin preparation.

In order to find the answer of main research questions, a study population will be selected. A particular hospital in Saudi Arabia, King Khalid University Hospital will be selected to perform the prospective study in this regard. It will be approved by the hospital authority but there will be no sponsorship from any external agency. Study population will be selected in such a way so that the participants are eligible for the specific research questions. Clustered sampling process will be chosen in which an area is divided in some geographic clusters and some clusters are selected for inclusion in the study.

Selecting sample population and rationale behind that

The sample population consists of the participants who meet all the eligibility criteria. In this case, the paper is focussed to find answers of research questions that are related to surgical ward and due to this reason; the surgical ward of the hospital will be specifically chosen as sample population. Consent from the participants will be obtained prior to the study to avoid any ethical as well legal issue. In order to find the effective interventions to manage surgical site infection, the strategies used by the healthcare professionals will also be recorded as data for further analysis in this regard.

After the sampling process was completed, the results were found out based on the study based on the patients at the surgical ward. The number of patients to participate in this research was 217, out of them 100 were male patients and the rest 117 were female. The age group of the patients ranged from 10 years to 55 years. The results seemed to favour the fact that most of the patients are prone to post-surgical infections in Saudi Arabia. From the total 217 samples, 112 samples were positive and 105 samples were negative.

The patients were observed for six months, and it seemed that the patients ranging within the age group 30-40 years had 12.4% surgical wound infection and the age group of 50-60 years of age people showed a growth of 11.9%("Clinical Study of Surgical Site Infection", 2016). The patients acquired to conduct the research had different types of surgeries, such as some had gall bladder surgery, some had plastic surgeries; some had appendicitis and so on. The main reason for the extensive infection growth was determined as all the patients were kept in the same room. The patients encountered different types of viruses from the other patients, which weakened their immunity system and inflicted infection on the surgical sites. 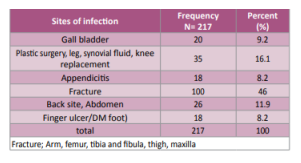 The staffs of the hospital are responsible for the effective management of the infections in the recovery wards. The hospital should look into the proper identification of the prevailing germs in the recovery wards and take up effective measures to against them so that the patients are not exposed to the chance of catching the virus. The hospital should also upgrade their use of antibiotics to fight against the deadly germs. Antibiotics should be available in the hospitals at all times for the effective treatment of the post-surgical patients. Saudi Arabia faces an infection rate of 51.3%, which is much higher than the rest of the world("Appraisal of Awareness of Surgical Staff about Surgical Site infection at Selected Surgical Units, Saudi Arabia", 2017). The literature review part of the research provides enough evidence to support the facts and the reasons for this growth. Studies show that Surgical Site Infections are more common among the children and the adults over the age of 55 years. The bacterial infections vary from ward to ward, based on the activities of the ward, or the type of patients in it. For an instance, the bacteria S.aureus is most commonly found in the operating rooms. It has been suggested by many doctors and researchers that advanced surgical techniques can reduce the risk of the post surgery infections. Recent studies show that a Surgical Site infection is more prevalent with women than men in Saudi Arabia.

To export a reference to this article please select a referencing stye below.